This field appears on the definition screen for all inventory items when the Production Orders tab is enabled and the first production order has been entered:

Note
The default value is 1. Inventory items not used in production orders should be left this way. So should inventory items always purchased from suppliers.

The Inventory Items tab shows you have 800 kg of pulp remaining at an average cost of 2.00 per kg. That average cost follows from your initial purchase of 1,000 kg for 2,000:

You also have 20,000 sheets of unused paper left over from the production run of 40,000. The paper is carried at .01 per sheet, calculated from production of 40,000 sheets from 400 worth of pulp. Because half the paper was used to print books, half the value of pulp used to produce the paper remains, while the other half has passed on because of the second production order.

Finally, you now have 100 books in inventory at an average cost of 2.00 per book. The total cost of inventory owned is the same 2,000 you originally spent to purchase the pulp.

In the absence of production stages, production orders issued the same day for pulp conversion and printing might be executed out of order. Manager does not normally distinguish transaction order when events occur the same day, a problem potentially made worse if other inventory purchases, sales, returns, production orders drawing on the same items, and inventory transfers also intervene in rapid succession. Average costs transferred to new finished goods could be wrong. In our example, final average costs for both the book and remaining quantities of interim items would be erroneous. This, in turn, would result in inaccurate profit calculations during an accounting period.

Production stages solve the problem. Manager checks your production orders for potential problems and displays an alert in the Inventory Items tab if it finds any:

Either way, the display may change with further recommendations.

Example
Because production stages were never assigned to the inventory items in our illustration, the Inventory Items tab displays an alert. When clicked, it shows the following recommendations:

The process is repeated. The ultimate result assigns production stages as below:

Example
Suppose we shred unsold books to create pulp. We create the production order below: 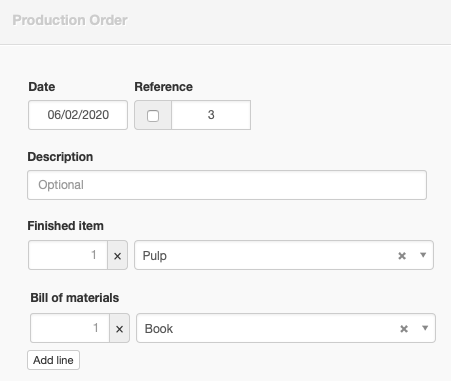 Manager shows an alert, recommending elevation of Pulp to stage 4:

But if we follow the recommendation, the program immediately suggests elevating Paper to stage 5. That leads to a recommendation to elevate Book to stage 6, and so on, forever.

The solution for circular production orders is to break the circle with an inventory write-off of the later-stage item. Then, a new production order can be used to add earlier-stage inventory produced from it. Nothing is entered for the bill of materials of the new production order if the item produced is stage 1, but the value of the write-off is incorporated as a non-inventory cost. If the item produced from the written-off item is higher than stage 1, additional inventory items can be added to the bill of materials. And if additional non-inventory costs are incurred, they can be added, too.

Example
We shred and write off 50 books, posting the write-off to a suitable expense account, which will serve as a temporary clearing account. For this example, we choose Other expenses: 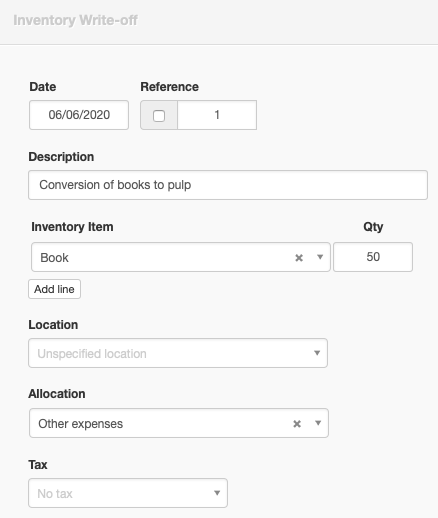 In this case, recycling yield is not 100%, so only 75 kg of pulp is obtained of the 100 that originally went into these 50 books. Drilling down from the Summary tab on the Other expenses account, we find the value of books written off was 100.00:

We immediately create a new production order for the amount of pulp produced by shredding. We add non-inventory costs equal to the write-off, allocating them to the same expense account as the write-off. We leave the bill of materials blank, because no other inventory items are involved: 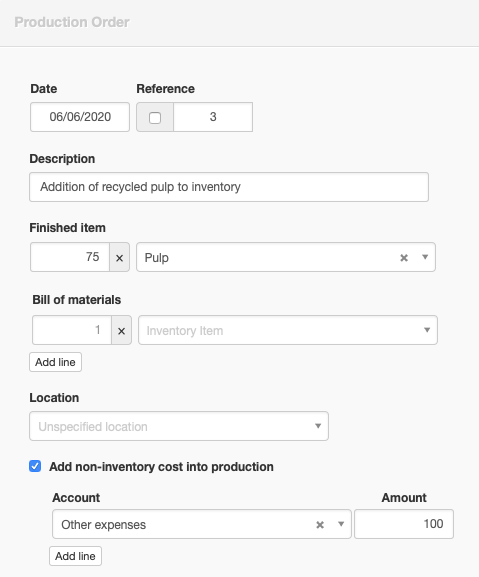