You can also define and customize foreign currencies by following procedures in this Guide. When you have set up both a base currency and at least one foreign currency, you will have the option to select a currency in the following tabs:

Note
When the first denomination in a second currency is set, an account named Foreign exchange gains (losses) is activated automatically. Manager uses this account to record gains and losses due to fluctuations in exchange rates.

Example
Northwind Traders conducts its own business in Euros. But it has several customers operating in other currencies. It sets Euros as its base currency. Its Balance Sheet is now denominated in Euros:

To handle its British customers, Northwind Traders maintains a bank account in London denominated in pounds. When setting up this bank account in the Bank and Cash Accounts tab, it chooses a currency accordingly:

The Bank and Cash Accounts tab shows the main company checking account and the London bank account in their respective currencies:

Meanwhile, the Summary tab converts everything to the base currency according to exchange rates entered in the program so assets can be properly balanced against liabilities and equity in a single currency: 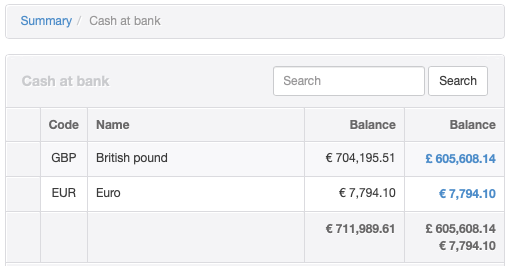 Most transactions will adopt the currency applicable to the account or subaccount they relate to. For example, when you set a foreign currency for a customer, all their invoices, credit notes and quotes will be denominated in that foreign currency.

Some transactions also allow you to force the program to accept a manually entered foreign currency amount as being equivalent to a base currency amount. Using this feature avoids changes to the status of related transactions as exchange rates fluctuate. Instead, differences caused by exchange rate changes are taken up automatically in the Foreign exchange gains (losses) account . If this is possible for a particular transaction, an optional field appears for the alternate Currency amount. Making that entry ensures the sales invoice will remain paid in full and never become overpaid. It also ensures the customer’s balance in Accounts receivable will not vary unexpectedly.

Example
Northwind receives 1,163 Euros into a Euro-denominated bank account from a customer in England who was invoiced for 1,000 British pounds. The receipt form shows the amount received in Euros, but includes an optional field where the original invoice amount in pounds can be entered: