Reverse charged VAT is used in some territories to collect tax on purchases from suppliers who are not subject to the tax authority’s jurisdiction. Usually, that means reverse charged VAT applies to imported goods or services that do not pass through customs.

Often, this is justified by explaining that foreign entities will be spared the need to register or make tax filings with the authority. But the method also eliminates the need for a tax authority to obtain filings and remittances from entities outside its control. Thus, reverse charged VAT improves tax collection.

Basically, reverse charging of VAT transfers responsibility for assessing and collecting VAT from a seller to a purchaser. Instead of being assessed VAT by and paying VAT to your supplier, you assess VAT on yourself and remit it directly to the tax authority.

However, since typical VAT regimens offset VAT paid on purchases against VAT collected on sales, the result is no tax actually paid on goods or services subject to reverse charged VAT. Think of this as simultaneously claiming the tax you would have paid the supplier and reporting the same tax the supplier would have received from you in a normal situation. Since those amounts are the same, no money changes hands for VAT.

So why implement such a scheme? And if no money is due to anyone, why not use a regular, zero-percent tax code? As mentioned above, reverse charged VAT improves tax compliance. But data submitted to the tax authority in connection with reverse charged VAT is also used to track the volume of trade with other jurisdictions for:

The use of reverse charged VAT tax codes ensures that total sales volumes are still reported and can be categorized according to their proper tax codes.

Reverse charged VAT is accounted for in Manager using a custom tax code. General procedures for creating custom tax codes are contained in another Guide. Read it first.

When creating the new custom tax code, give it an informative Name and select Zero (0%) in the dropdown Tax rate field. Check the box for Reverse charged. When the percentage field appears, enter the rate of the VAT tax to be reverse charged. Click Update.

Note
If local tax law requires, custom titles can be applied to sales invoices and credit notes where this tax code is used. Check the appropriate boxes and enter the desired titles: 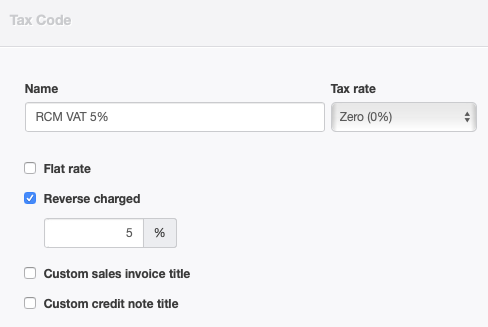 Reverse charged VAT tax codes are applied the same way as other tax codes. While applicability of the code to a line item is shown, they do not affect the balance of the transaction.

Example
Sample Manufacturing purchases an annual subscription for accounting software from ACME Services. The subscription costs 1,000.00, and 5% VAT is due on the purchase. But, because the supplier is foreign, local tax regulations require the tax to be reverse charged. Sample applies its RCM VAT 5% tax code on the purchase invoice, with the following results:

If no reverse charged VAT amount shows on a purchase transaction form, what happens to the tax? The answer is found on two tax reports in the Reports tab.

A Tax Summary report for a time period including the transaction shows both the VAT amount that would have been collected by the supplier on its sale in an ordinary situation and the VAT you would have paid the supplier on your purchase in such a case. These offset, leaving a net tax liability of zero for the transaction. Note that for reverse charged VAT tax codes, figures on the Tax Summary are effective amounts, although they do not reflect the actual transaction.

Example
Sample Manufacturing creates a Tax Summary for its financial year. (For purposes of illustration, only the single, reverse charged VAT transaction in the examples above is included.)

A Tax Transactions report will include every reverse charged VAT transaction during the period covered. On this report, actual transaction amounts are shown.

Note
The transaction amounts are from the perspective of your business, not the supplier’s business. Therefore, Total Sales figures will be the same as Tax on Sales figures.

Because both the purchaser’s and supplier’s sides of the reverse charged VAT transaction are reflected in the tax reports, all figures typically necessary for proper tax filing are available.